Eight days ago, at 5:30 a.m., my husband was loaded into an ambulance and taken to Johns Hopkins hospital.  He was to receive treatment for a 1:1,000,000,000, rare pancreatic tumor.  Our family’s Christmas gift?  Major surgery in a city four hours away.

As we traveled, I chronicled how cool my kids are with unexpected trips. 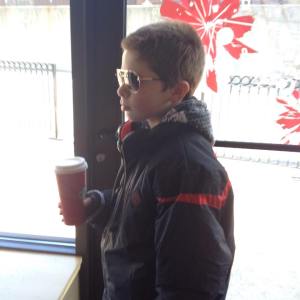 I received a Facebook message from a member of my church.  Her daughter has serious health challenges and this mother shared of a holiday she spent in the hospital.  One idea stood out from her simple message.  Look for God in the little moments.

I did my best to create little moments of joy for the kids and the family.  I decorated the hotel room.

My brother and his fiancée joined us to entertain the kids.  Soon we were joined by Pap and Uncle Ryan.

We took this photo on the way to his surgery.  We joked we should send it out as a New Year’s card with the caption, “Hope you have a healthier NEW year than we had LAST year!”

My prayers were whispered, gasping attempts at faith in the face of cold, hard reality.  My husband was undergoing rare and complicated surgery.  The only certain outcome?  Pain on recovery for him and pain for me as my ankle continued to shred within my cast.

The first little moment? Surgery took half the time and went ‘textbook’ according to the Boston Reds devotee’ of a surgeon.  We could all see him in the ICU, two at a time.  They even offered to sneak in the children for a quick visit.

As we left the waiting room, buoyed by the good news, I noticed a young father cradling his infant close to him.  I offered to give him the room we had used for waiting so he could have a quiet place.

As he settled in, I felt a familiar nudge. I knew this was another of the little moments I was to look for.  I asked him if I could pray for him.  Turns out, Jonah was holding his 11 week old son as his mother, Meghan, was undergoing surgery.  I prayed Psalm 138:8 and asked for a miracle for his wife.  We hugged, tears in our eyes.  As I slid away on my scooter, I prayed Meghan would hold her son again.

Following this little, powerful moment, was the hell of ICU.  Somehow I managed to stay calm as I watched my husband gasp in pain.  I told him how strong he was and how great everything went.  When he cried and apologized, I hushed him and kissed him.  I smiled as we left him there, full of a peace I knew was supernatural.

Later we had Christmas.  We were silly and giggly on the outside.  I drank wine as I was far from smiling on the inside-the earlier peace eluding me.  Pap dressed up in the gifts the kids bought him, and my brother celebrated the 7th plastic fish he received.  If you closed your eyes, it could have been any other holiday celebration.

The next day, Ron was moved to a room.  I waited for him to be settled in his room in a family waiting area.  In the corner was a terribly thin woman, a tracheotomy in her throat, IVs in her arm.  I watched as she visited her children.  A toddler, her grandchild, climbed up and around her while playing on an iPad.

The nurse brought Ron down the hall.  He looked terribly gaunt, pale and obviously in pain.  I told him I would meet him in his room where we could sit and rest.  As he walked away, I started to cry.  The tears kept coming despite my stubborn insistence to my heart to suck it up.

I felt thin arms encircle me.   “He’s going to be just fine,” a hoarse voice whispered.  I looked up and realized it was the patient from across the room.

“Thank you,” I whispered back.  “I hope you are at the end of your journey here,” I said as I blew my nose in my sandwich napkin.

“I’ve been here three weeks and I’m not done.  I’ll never be done,” she replied.  “It’s not about me anymore,” she went on, looking at her grandson,”It’s about him.”  With another hug she shuffled back across the room to play.

Tonight as I look back on the past 15 days, I can recognize the little moments where God showed up.  I’m thankful for them.  I pray for more.

I don’t know what you are experiencing in your life.  However, I pray you too would find the little moments where God shows up.  Share them in the comments.