This post contains some rough language.  Reader discretion is advised.

My mother was a professional martyr.  Her specialty? The drive-by.  As we would be leaving, herding children into the car for the long trip home, she would say, “I can’t talk to you next Thursday as I’m having surgery.  They don’t think it’s cancer.  Have a great drive!”

What-the-what?  I, of course, would feed into the emotional blackmail and demand to know what was going on.  I would pour out all my daughterly devotion until I was utterly spent.  To which she would simply reply.  “Of course I’ll take care of myself, no one else will.”

This independence.  This utter conviction of superior strength by virtue of surviving more shit than could fill the darkest Russian novel.  This complete lack of humility all define the heart of the Martyr.  I followed in my Mother’s footsteps and became the Mother of All Martyrs.

After all, death had claimed so many that I loved.  Situational poverty consumed my savings.  I was actually conned into thinking resigning was better than being fired because they would refuse my unemployment.  And my children, oh my poor dear ones, couldn’t read perfectly by age four! 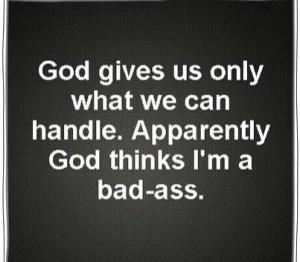 This quote I proudly displayed on my FB page.  I even printed it and shared with work colleagues.  I stood tall, chest puffed out-convinced of my own, unique Martyr status.  After all, I had been through so much and was facing so much, surely, God would think I am one of the baddest of the asses.

My fiend who speaks with a prophetic edge which quite simply cuts through the bull quicker than a laser, shared something with me.  Like a dagger to the cold, cold, Martyrs heart, she reminded me of something.  Jesus wants to be the bad-ass FOR ME.

I once believed Jesus was magic.  I believed if I just prayed hard enough or loud enough or often enough or decreed enough that I could appropriate my rights as a child of God.  Yep I did.   In looking back to that time, I wonder if Jesus was standing outside the prayer circle trying to get a word in edgewise.

What if, in the midst of the pain so real it’s a glass sliver piercing my heart, God wants to take some of it from me?  His own Son asked the same questions I have.  “If it is possible for this cup to pass from me, please do.  Nevertheless, not my will but Yours be done.”

The Martyr would say “It’s God’s will” with a sigh and a tired look followed by, “but I will get through it, as I always have.”

If Jesus is to be my bad-ass, then I have to say, with all honesty.  “If this cup-this cancer, this pain, this loss, this brokenness as familiar as my fingerprint- will not leave then what is Your will in this situation?  Not my will but Yours be done.”

This cup hasn’t passed from me.  Cancer still eats away the future I have with my father.  Debt eats away at my bank account.  My new job will either catapult me higher or stifle me into submission.  My five year old can’t read.

I won’t even pretend the Martyr has gone off into that good night easily.  Like a zombie with good intentions she refuses to stay dead.  However, she has a new motto.

P.S.  Major points to anyone who can point out which movie inspired the above mentioned motto.